Markets Higher Heading Into the 4th of July

U.S. stock markets finished the 4–day week much higher than the previous week, heading into the long, three–day 4th of July weekend.

When the market closed on Tuesday afternoon, investors closed the books on the second quarter of 2020 and it appeared that the joy of celebrating a bunch of quarterly records for the major indices spilled over into the following two trading days to kick off the third quarter. 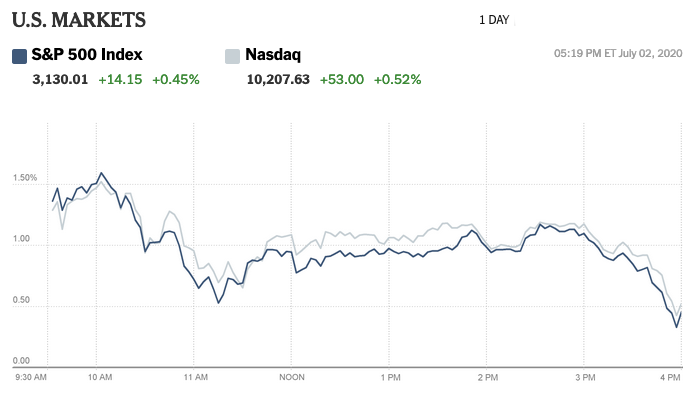 The week also saw a bit more unexpected economic data indicating that a recovery is underway, although there is still a long way to go before we’re back to where we were at the beginning of the year. Nonetheless, it was great to see favorable employment numbers reported and housing sales move up, even while a few states were backpedaling on their reopening plans.

The National Association of Realtors released its “Pending Home Sales Index” on Monday and the results were beyond expectations by a long shot. Pending sales of existing homes surged 44.3% in May, which is notable given that the previous two months saw declines. Further, when an organization like the National Association of Realtors uses words like “spectacular,” you can bet that even the data collectors were surprised by the results.

From the NAR release from June 29th:

“The Pending Home Sales Index, a forward-looking indicator of home sales based on contract signings, rose 44.3% to 99.6 in May, chronicling the highest month-over-month gain in the index since NAR started this series in January 2001. Year–over–year, contract signings fell 5.1%. An index of 100 is equal to the level of contract activity in 2001.”

“This has been a spectacular recovery for contract signings, and goes to show the resiliency of American consumers and their evergreen desire for homeownership,” said Lawrence Yun, NAR’s chief economist. “This bounce back also speaks to how the housing sector could lead the way for a broader economic recovery.”

On Thursday, the Department of Labor released its Employment Situation Summary and there were encouraging signs as we head into the second half of the year. After losing a stunningly–high 22 million jobs in March and April, we added back 7.5 million jobs in May and June, with much of those gains happening in the last two weeks. 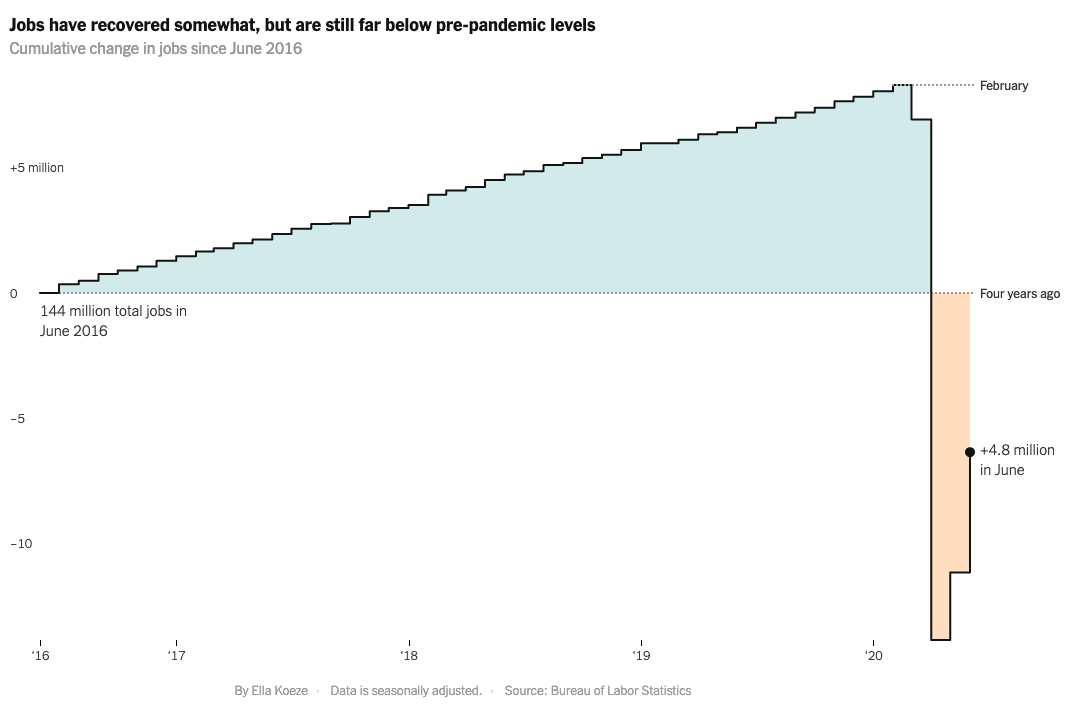 Further, the unemployment rate has fallen to 11.1%, still very high by recent standards, but heading in the right direction. What is especially encouraging is the fact that weekly initial claims declined for the 13th straight week.

Global equity markets continued their rebound from the dismal first quarter of 2020 and by the time the second quarter closed, the major U.S. indices had marched to record quarterly gains, including:

It should be noted that the second-quarter rally came after a dismal first quarter and the contrast between the two quarters is dramatic, as the first quarter saw:

Despite the barrage of negative economic news in the second quarter, Wall Street was optimistic as the economy gradually reopened for business.

Keep the Record Numbers in Perspective

Within hours of markets closing the books on the second quarter, the media piled on too, with headlines like:

While investors are no doubt thankful for the second quarter’s performance, it’s important to keep these “performance records” in perspective, however.

Does the 40% feel record-setting to you? Maybe not.