Markets Run Into the Wall of Worries

Well, given the rise in stock markets of the last few weeks and the astronomical jumps of the markets from their late March lows, a decent pullback was in the cards. The reason for the pullback, on the other hand, is hotly debated. Taking a look at those astronomical jumps, investors saw the S&P 500 up by over 40% since March 23rd; NASDAQ up almost 50% since then and the smaller–cap Russell 2000 up even more than NASDAQ. 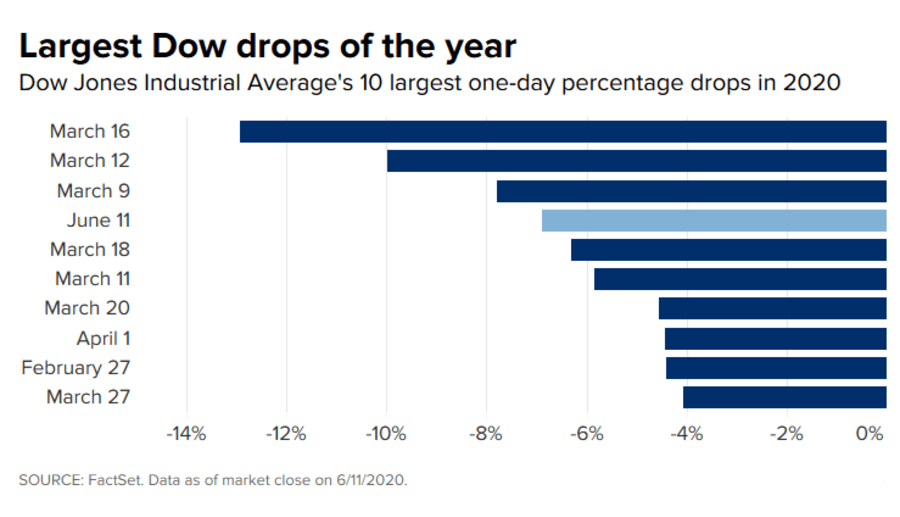 While the reason for the pullback is anyone’s guess, it is likely a combination of a bunch of Worry Bricks that make up a Wall of Worries, including:

While most will just focus on the ending weekly declines, at the beginning of the week, the markets did hit a few key milestones: the S&P 500 was briefly positive for the year and NASDAQ was way past that 10,000–point threshold. But, then the Worry Bricks started piling up.

On Wednesday, the Federal Reserve met and unanimously voted to leave short–term rates unchanged but will “increase its holdings of Treasury securities and agency residential and commercial mortgage-backed securities at least at the current pace to sustain smooth market functioning, thereby fostering effective transmission of monetary policy to broader financial conditions.”

Here is what the Fed said about the economy and its outlook:

“The coronavirus outbreak is causing tremendous human and economic hardship across the United States and around the world. The virus and the measures taken to protect public health have induced sharp declines in economic activity and a surge in job losses. Weaker demand and significantly lower oil prices are holding down consumer price inflation. Financial conditions have improved, in part reflecting policy measures to support the economy and the flow of credit to U.S. households and businesses.

The ongoing public health crisis will weigh heavily on economic activity, employment, and inflation in the near term, and poses considerable risks to the economic outlook over the medium term. In light of these developments, the Committee decided to maintain the target range for the federal funds rate at 0 to 1/4 percent. The Committee expects to maintain this target range until it is confident that the economy has weathered recent events and is on track to achieve its maximum employment and price stability goals.”

Deflation on the Horizon?

On Wednesday, the Department of Labor released CPI numbers for May and there was a chorus singing deflationary tunes for the rest of the week.

The U.S. Bureau of Labor Statistics reported that:

Further, it was reported that:

“Declines in the indexes for motor vehicle insurance, energy, and apparel more than offset increases in food and shelter indexes to result in the monthly decrease in the seasonally adjusted all items index. The gasoline index declined 3.5 percent in May, leading to a 1.8–percent decline in the energy index. The food index, in contrast, increased 0.7 percent in May as the index for food at home rose 1.0 percent.

The index for all items less food and energy fell 0.1 percent in May, its third consecutive monthly decline. This is the first time this index has ever declined in three consecutive months. Along with motor vehicle insurance and apparel, the indexes for airline fares and used cars and trucks declined in May. The indexes for shelter, recreation, medical care, household furnishings and operations, and new vehicles all increased.“

This data was another Worry Brick, as deflation is now a real possibility as this is the first time in over 60 years that core CPI has dropped for three consecutive months.