Markets Leap for Third Week in a Row

The stock market has not ignored the truly awful economic data that it has received since mid–March – it just seems like that lately. And while the COVID–19–bear that dethroned the 11–year bull took over Wall Street with lightning–fast speed, looking at market performance of the last few weeks and overall YTD, it’s clear that the markets were not derailed completely.

This week, as was the case for the last couple of weeks, suggests that the markets believe things are only going to get better. That sums up the mood on Wall Street pretty well.

For the third week in a row, stocks climbed higher – much higher. This week saw oil prices jump, Treasury yields rise to an 11–week high and the U.S. economy add 2.5 million jobs in May. Yes, the unemployment rate is still over 13%, but the trend line of the last few weeks has been very encouraging, suggesting that jobs are coming back and a recovery is happening faster than anticipated.

Monday brought the start of a new month and the first week was terrific, but it’s also important to celebrate that global equity markets continued their rebound in the month of May too. For the month of May:

First the bad news that everyone knows: over the last three months, the U.S. economy lost almost 20 million jobs, the largest three–month decline ever. And while many were hopeful for May numbers to show improvement, the fact that non–farm payrolls added 2.5 million jobs took almost everyone by surprise. For perspective, consensus expectations were for May’s numbers to show a loss of about 9 million jobs. That’s a big swing. 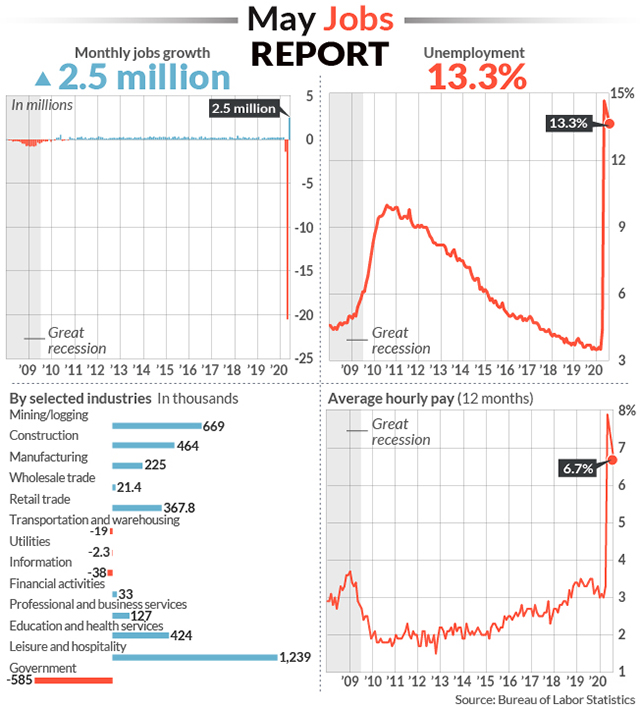 Directly from Friday’s release from the U.S. Bureau of Labor Statistics:

“In May, employment rose sharply in leisure and hospitality, construction, education and health services, and retail trade. By contrast, employment in government continued to decline sharply.”

But wait, there’s more: labor participation increased and the number of hours worked increased, but the average hourly earnings for all employees on private nonfarm payrolls dropped by 29 cents.

On Monday, the U.S. Census Bureau released construction spending data and reported that:

Despite those negative monthly numbers, during the first four months of 2020, construction spending was up 7.1% versus the same period in 2019.

Further, from Friday’s release from the U.S. Bureau of Labor Statistics:

“Construction employment increased by 464,000 in May, gaining back almost half of April’s decline (-995,000). Much of the gain occurred in specialty trade contractors (+325,000), with growth about equally split between the residential and nonresidential components. Job gains also occurred in construction of buildings (+105,000), largely in residential building.”