Markets Retreat To End the Week as Negative News Abounds

The U.S. stock markets saw more volatility on the week, as the VIX steadily rose all week until mid–morning Thursday, when it turned around and declined, still finishing the week higher from where it started. Although Friday saw the S&P 500 gain a little more than 1% on the day, it was not enough to push the major large–cap index into positive territory.

Early in the week, the nation’s top coronavirus expert, Doctor Anthony Fauci, warned Congress and the American public that the possibility of another outbreak was high if states opened too quickly. And Dr. Fauci’s warning seems to coincide with the public too as more than 2/3 of Americans think that states are opening too quickly, according to a survey from Pew Research.

Doctor Fuaci’s remarks were followed by less than upbeat remarks from the Chair of the Federal Reserve and both really hung over the markets all week. And then there was the flood of negative macroeconomic data that just kept coming at Wall Street too.

Of the 11 S&P 500 sectors, the divergence between the best performers and the worst performers was not small. When Friday’s markets closed, the Energy and Real Estate sectors were hammered as both lost more than 7%, while the Health Care sector was barely positive.

Production Falls to Lowest Level Since 1919

The Federal Reserve reported that total industrial production fell 11.2% for the month of April, its largest monthly drop since 1919. Yes, that’s in more than 100 years.

Directly from the Fed’s release on Friday:

The National Federation of Independent Business published their Small Business Economic Trends data on Tuesday and optimism among small businesses dropped substantially. Investors will remember that the Index is a composite of 10 components based on expectations for: employment, capital outlays, inventories, the economy, sales, inventory, job openings, credit, growth and earnings and here is what the release reported:

“Small business optimism took another dive in April, falling 5.5 points to 90.9, with owners expressing certainty the economy will weaken in the near–term, but expecting it to improve over the next six months. The Optimism Index has fallen 13.6 points over the last two months, with nine of 10 Index components declining in April and one improving.” 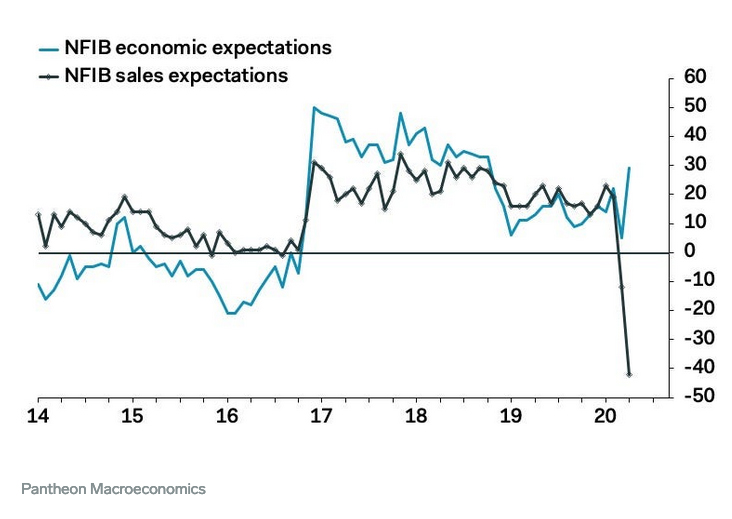 The NFIB highlighted that expectations for sales in the next three months declined to a net negative 42%, which is the lowest level in the survey’s 46–year history. For perspective, the previous lowest-level was net negative 24% in April 1980.

The Bureau of Labor Statistics published the Consumer Price Index, which happens to represent about 87% of the population and is categorized by expenditures, commodities and service groups so that investors can better understand underlying inflationary trends. 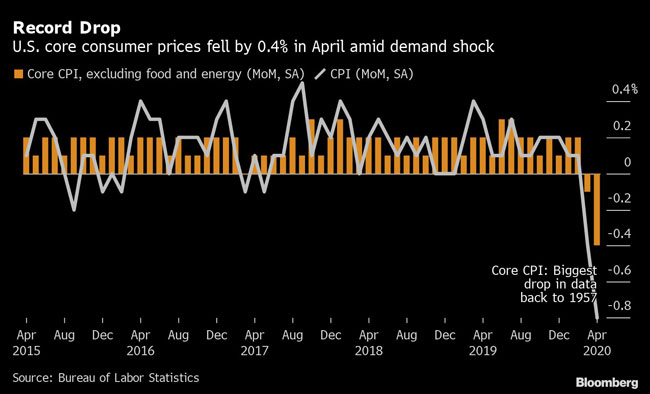 On Tuesday, it was reported that the Consumer Price Index for All Urban Consumers declined 0.8% in April, the largest monthly decline since December 2008.

Here were the main contributors to the change:

The CPI for all items – less food and energy – fell 0.4% in April, the largest monthly decline in the history of the series, which dates to 1957.

Before the markets opened on Wednesday, Federal Reserve Chairman Jerome Powell spoke about current economic conditions in a webcast hosted by the Peterson Institute for International Economics.

Powell noted severe declines in activity employment and warned of significant risks ahead, but strongly stated that all 17 members of the Federal Open Market Committee were not looking at the option of negative rates. He even went so far as to say that all of the FOMC members were against this option back in October and that the virus has not changed their opinions.

His comments were understandably negative, lamenting the damage caused by the virus, especially to small businesses around the country that might never come back. But he did say that once the virus was under control, he expected the economy to substantially recover.

The markets digested Powell’s remarks and headed south, with the DJIA, S&P 500 and NASDAQ all retreating about 2% on Wednesday. It was particularly disheartening for investors to see NASDAQ retreat into negative YTD territory after having just climbed into positive territory last week. But by the time Friday’s closing bell rang, NASDAQ was again in positive territory for the year.