Stocks moved north healthily this week as the DJIA hovered around the 20,000–point fulcrum and ultimately ended the week over 21,000. Most of the market news dealt with just how big the government’s actions and stimulus would be and by week’s end, the answer was known: $6 trillion.

On Tuesday, the DJIA surged to its best day since 1933 as the other U.S. indices jumped about 10% each on the day too.

Despite the DJIA recording its best weekly gain since 1938, the markets are still firmly in the paws of the bears. Since their peaks, the DJIA is off more than 26% from its record high, the S&P 500 is off 25% from its high on February 19th and NASDAQ is off over 23% from its high.

The Energy sector, which has taken a beating for a very long time, jumped 21.7% on the week, despite the price of oil dropping again on the week. The range of performance among the 11 S&P 500 sectors was significant, however, as the worst performer on the week – the Communications Services sector – returned less than 5%.

Investors were worried that the unprecedented government stimulus package would be delayed by partisan politics, especially since it did not advance early in the week and the two sides were sniping back and forth.

Finally late on Tuesday, all sides agreed to a huge $2 trillion package that includes direct payments to families, including $1,200 per adult and $500 per child, support for small businesses and expanded unemployment benefits. The Senate passed the stimulus package by a unanimous vote and it passed the House of Representatives on Friday by a voice vote. President Trump signed the bill late Friday and said this during the Oval Office signing:

“I want to thank Democrats and Republicans for coming together and putting America first.”

On the heels of unprecedented rate cuts, the Federal Reserve continues to support its quantitative easing program, this time suggesting that there was no limit on its purchases of Treasuries and agency mortgage–backed securities as well as purchasing investment-grade corporate bonds.

The Fed also announced it would help maintain the flow of credit to municipalities around the country and establish a lending program for small businesses.

The Department of Labor reported for the week ending March 21st that the initial jobless claims came in at 3,283,000, an increase of 3,001,000 from the previous week’s level. This is the highest level of initial claims in history. 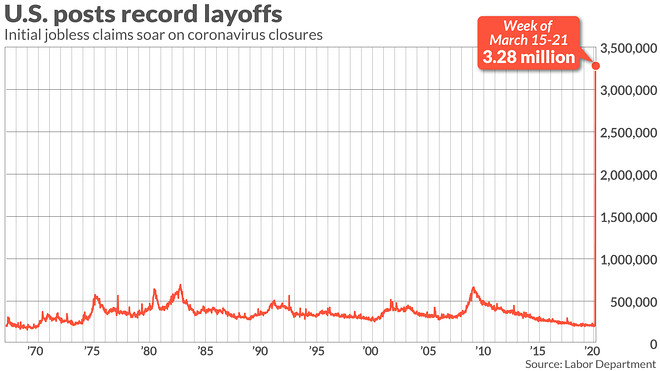 For comparison purposes, the previous high was 695,000 in October of 1982. The record high numbers are all due to the coronavirus, as the DOL suggested in its opening statement to its Release:

“During the week ending March 21, the increase in initial claims are due to the impacts of the COVID-19 virus. Nearly every state providing comments cited the COVID–19 virus impacts. States continued to cite services industries broadly, particularly accommodation and food services. Additional industries heavily cited for the increases included the health care and social assistance, arts, entertainment and recreation, transportation and warehousing, and manufacturing industries.”

Consumer Sentiment is Way Down (No Surprise)

According to the University of Michigan survey, consumer sentiment dropped precipitously. From their Release:

More from the Release:

“The 1980 and 2008 collapses in consumer confidence sparked long and deep recessions. The Katrina decline was reversed within three months, and some observers compared that “V” shaped economic episode to the expected impact of the coronavirus.

What didn’t show a “V” shape response was the recovery of New Orleans, a closer comparison to today’s national economy. A more comparable prior decline occurred in August 1990, when the Sentiment Index fell by 11.8 points due to the invasion of Kuwait, and subsequently recorded an all-time record gain of 17.3 points in March 1991. Those two outsized changes in the Sentiment Index defined the start and end of the 1990-91 recession. Just as in the 1990-91 episode, the Sentiment Index can be expected to decline in the months ahead.”